YOUSSEF KHATIB
This is an examination of the second part of the Picus communication level in Deus Ex: Human Revolution which was released in 2011. This article is derived from analysis work done in my master thesis on stealth centric game design and playstyles with added opinions and critic as well as suggested on improvements.
<
>
The level takes place in an office type cubical environment, invaded by armed guards searching for the Player character, Adam Jensen. However, the majority of this level consists of relatively open areas and corridors, with a few available office rooms and ventilation shafts that circumvents portions of some the areas.
​
​The cubical area at the center of the level is where most guard patrol traffic takes place.

​The level also consists of two floors that the players can visit and utilize in their efforts to remain undetected. The second floor is built around a catwalk surrounding the cubical area on the first floor and a corridor leading through office rooms. There are however also a few work desks. There are a total of eleven guards patrolling this section of the level. The majority of which are distributed to an area populated with work desks situated close to each other. While the rest of the guards are generally patrolling alone in corridors or open areas adjacent to each other. 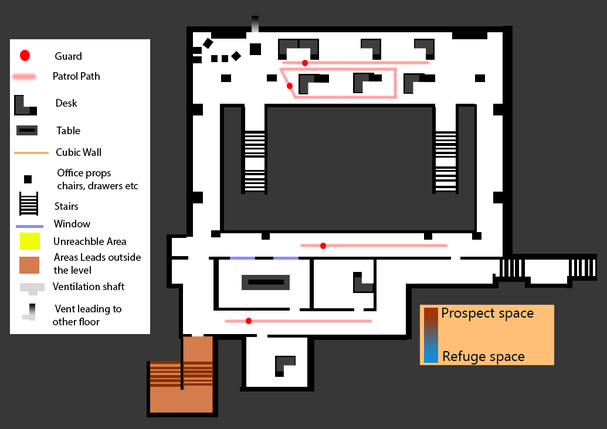 The way by which, players hide and avoid their adversaries in this games if mainly through hiding around the available furniture and the architecture of the level. The guards are by default in an "alarmed" state,
As the distribution of guards is assigned to a concentrated patch of desks and a sparsely guarded lobby on the first floor. On the second floor, the guards are more evenly distributed with two patrolling around a few work desk another guard patrolling on the other side, along with the catwalk and the last guards patrolling the corridor.

It is almost a requirement for Stealth centric games to provide more than one path of successes in the environment. While this level provides the player with multiple paths of progression through the level. There are paths in place allowing the player to avoid the guards with little or no threat of detection which significantly diminishes uncertainty. 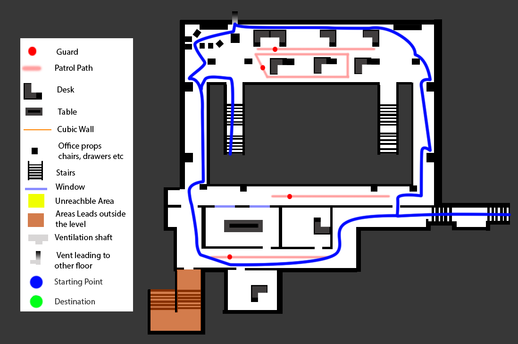 Possible paths of progression 2nd floor
This is mainly noticeable on the first floor where the player starts. As the upper part of the main hall provides a path with minimal of contact with the guards. This game has often been criticized for having to large gaps in security and surveillance, especially when it comes to the player making use of ventilation shafts circumventing entire areas populated by guards.
In stealth centric games there is a balancing act, where if security is too tight, the player will be incapable, however if there are too many means that support the player, the game will cease to be stealthy.(Randy Smith, Thief Game Designer, GDC 2006)

Ventilation shafts circumventing entire areas are not present in this level, however. There are two ventilation shafts that the player can enter from multiple ducts connected to them. The first one contains a shortcut to an office room on the other side of the wall with a second path leading up to the second floor near patrolling guards. The second ventilation shaft is situated between the office lobby and the bathroom. In this sense, the ventilation ducts mainly create alternate entry points to the various rooms.
The main improvements to this level involves increasing the guards patrol traffic from the concentrated patch in the middle around work desks to be more stretched out  across the main office hall. To be more similar to the second floor. And do so in way that limits number of spaces in the main hall that the guards never pass through. Seeing as the player character is capable to crouch and effectively hide under the desk and become reasonably hidden from the guard’s vision. The player character also move along walls and cover objects allowing the player react on their feet and improvise.